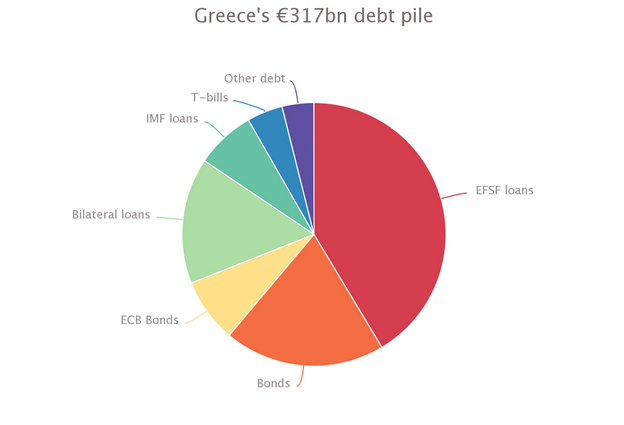 Depositors are responding to the risk of waking up one morning to discover their  Euro deposits have been convered to drachmas.

# 23rd April: The ECB has agreed to expand ELA (emergency lending program) to Greek banks by €1.5bn to €75.5bn. as long as they stay solvent. The Greek bank share index roseover 13% on Wednesday. Link to Reuters comment

BACK TO APRIL 21st POSTING

German,  Greek, European and other interested  finance ministers are in  Washington for the annual joint meetings of the IMF and the World Bank together with the great and the good among the world’s major policy makers and economists. They have  an opportunity to help bridge the differences between Greece, the IMF and Europe. The Brookings Institution were quick off the mark.

SCHAUBLE AND VAROUFAKIS AT BROOKINGS:

‘As finance ministers from around the world gather in Washington, DC this weekend for the annual meetings of the IMF and World Bank, Brookings hosted two of them, separately, in back-to-back events yesterday: Germany’s Wolfgang Schäuble, and Greece’s Yanis Varoufakis. The convergence of the two ministers is of particular interest because the government in Athens is out of money, is unable to borrow on global bond markets, and is dependent on loans from the rest of Europe and the IMF. But Greece’s creditors, including Germany, are reluctant to lend Greece more money unless Athens institutes firm commitments to make Greece economically more competitive.’

‘Against this backdrop, the two foreign ministers gave remarks and answered questions in the two events at Brookings. Senior Fellow David Wessel, director of the Hutchins Center on Fiscal and Monetary Policy, participated in both events, and spoke on NPR this morning about what he heard.

“Both sides say they are looking for common ground,” Wessel told NPR’s David Greene,”but right now it’s hard to see what policies will fly politically in Greece and satisfy the conditions set by the IMF and Europe. It’s a game of chicken: each one expects the other side to blink first. And Greece is taking a hard line, expecting the creditors will flinch because they are afraid that if there is an implosion in Greece that will produce a lot of problems in other vulnerable countries.” You can listen to the interview below this video, which highlights various remarks of the two finance ministers.’

The Greek economy and its global partners: A conversation with Greek Finance Minister Yanis Varoufakis

Eurozone at a crossroads (again) : A conversation with Wolfgang Schauble.

I found listening to both talks brought insight on the contentions between them  and personal respect for both Schauble and Varoufakis.  Without in any way distracting from their knowledge or sincerity both could  come from central casting.

MUNCHAU ON THE PROSPECTS FOR A GREXIT

Wolfgang Munchau writes  In a Financial Times article ‘Greek default is necessary but Grexit is not.’  For Greece, defaulting on debt to the IMF and ECB  ‘ is the only route to short term relief …..but no one has ever done it.’ After reviewing  options open to Greece Munchau  finds ‘the economic case for a debt default  overwhelming.’

However he brands  Eurozone’s crisis management as  ‘catastrophic’ and doubts the Greek government has the experience or resources to manage the complexities of  a default without a Grexit  causing  incalculable economic risk to Greece and harm to  the EU’s geopolitical ambitions and global reputation.’

SOME INDICATIONS ON GREXIT COSTS:

Varoufakis warns unambiguously on the social and financial disaster for Greece  that would follow a Grexit.  Financial markets agree. Investors have dumped Greek Bonds, The 2 year yield has jumped above 28%. and credit default swops are soaring. Capital is flowing out of Greece and expectations for Greek economic growth are heading into freefall.

Europe and Germany in particular are also exposed to serious direct  financial losses likely to flow from a Grexit. Tzipras is already raiding  funds to keep afloat . He may be forced to call a referendum to seek a new political mandate and,  following a Grexit,  Germany  will be exposed to substantial losses through the Eurozone’s Tier 2 payments arrangements.

A safe bet bet with Europe is contentious  issues will be despatched to the long grass. My guess is that’s less likely with this issue. A key theme  of Varoufakis’s Brookings talk was enough of the extend and pretend – it hasn’t worked in the past and won’t in future. But, faced with the alternatives of a financial disaster that could be resolved with debt maturity extensions at near zero cost ,the Syzira government will be wise to reach a survival accommodation even if an element of pretend and extend remains.

But accidents  happen and Munchau writes at the end of his analysis quoted above:

‘I think I know the answer to that, and wonder whether one or more people on both sides of these discussions may simply be miscalculating. We may be on the verge of one of those sleepwalking moments in European history.’

Pundits are again screaming from the rooftops its time to buy gold. The Goldwatcher Golden Rule is moderation. Gold, bought in moderation at a reasonable price can be useful insurance against the unexpected and the unthinkable. Gold as a speculation calls for different motivation. The impasse between Syriza, its creditors and the EU should be resolved with an accomodation. However it’s not impossible Syriza is hatching plans for a Grexit. I introduced this subject in a posting on The Globewatcher today.

“Seven years after the bursting of a global credit bubble resulted in the worst financial crisis since the Great Depression, debt continues to grow. In fact, rather than reducing indebtedness, or deleveraging, all major economies today have higher levels of borrowing relative to GDP than they did in 2007.

“Global debt in these years has grown by $57 trillion, or 17 percent of global GDP (Exhibit 1). That poses new risks to financial stability and may undermine global economic growth.”

A key finding in the report is “debt-to-GDP ratios have risen in all 22 advanced economies in the sample, by more than 50 percentage points in many cases”

“The rise of government debt, which in some countries has reached such high levels that new ways will be needed to reduce it;

“The continued rise in household debt—and housing prices—to new peaks in Northern Europe and some Asian countries; and

“The Quadrupling of China’s debt, fueled by real estate and shadow banking, in just seven years.”