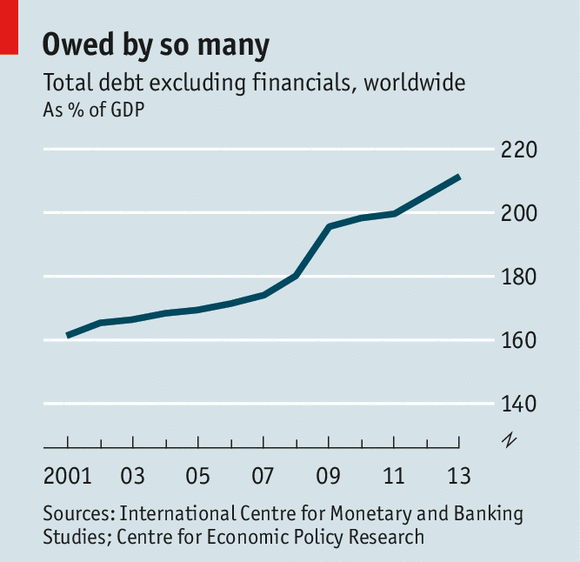 Ray Dalio, billionaire founder and head of Bridgewater Associates,  one of the world’s most successful money managers, consistently makes the case for investors to own gold as protection against adverse outcomes with other investments. His view is unambiguous:

The above chart accompanies The Economist article “Falling Off The Supercycle – Trapped In A World Of High Debt, Low Rates and Slow Growth.”

The Economist  cite BCA Research as having defined the debt supercycle  as” the period since the Second World War  in which debt levels have inched persistently higher and notes “BCA now thinks the Debt Supercycle has come to an end. This is not because the overall level of debt has fallen; indeed, if one excludes the financial sector, the global level is still rising (see above chart)… monetary policy has failed to create a credit boom in the private sector, even with the help of zero short-term interest rates.”

As early as 2013 BCA commented  :  “The Supercycle reached an important inflection point in the recent economic and financial meltdown with authorities reaching the limit of their ability to get consumers to take on more leverage.  This forced the government to leverage itself up instead. Once fiscal policy is pushed to the limits of sustainability, the debt Supercycle could come to a violent end.”

In an article published in  the Financial Times last week titled Pay Attention To The Long term Debt Cycle and  headlined limits to spending growth financed by debt and money raises risks of policy makers  pushing on a string Dalio writes:

“I have a controversial view that is based on my alternative economic template, and I feel a responsibility to share at this precarious time.

“…There are limits to spending growth financed by a combination of debt and money. When these limits are reached, it marks the end of the upward phase of the long-term debt cycle. In 1935, this scenario was dubbed pushing on a string…

“This scenario reflects the reduced ability of the world’s reserve currency central banks to be effective at easing when both interest can’t be lowered and risk premia are too low to have quantitative easing being effective.”

“…where things now stand across the world’s reserve currencies. expected returns of bonds (and most asset classes) are relatively low in relation to the expected returns of cash. As a result, it is difficult to push the prices of these assets up and it is easy to have them fall. And when they fall, there is a negative impact on economic growth.

When this configuration exists…stimulating demand is more difficult, and restraining demand is easier, than is normally the case.

At such times the risks are asymmetric on the downside…

2: Investors seeking advice should retain the services of a regulated and qualified adviser.

3: Opinions expressed in comment on this site have short sell by dates and may be  past their sell by the  date when they are read.